The Bulldogs played 131 games from 2010 through 2019, winning 110 of them (or about 84%)... but not all of the games were great. There were blowout victories and a few defeats. Below you'll find a list of 22 of the best Wilson wins from the 2010s. The top 10 features the corresponding Reading Eagle article and my pictures from the game.

Of the 21 games Wilson lost in the 2010s, at least eight of them were tightly contested and incredibly heartbreaking. They are listed below... 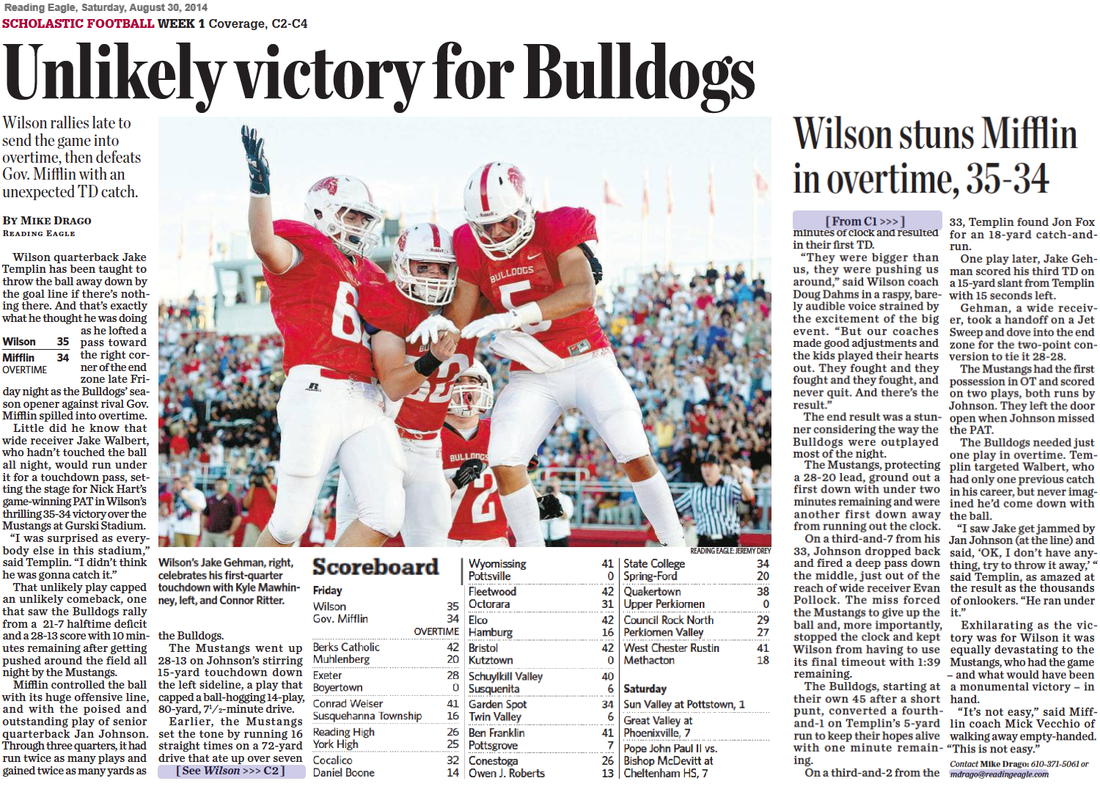 Comments: This is the game mentioned most often when asking fans and former players for their input, and it's easy to see why. The Bulldogs trailed by 14 at halftime and by 15 with less than 10 minutes to play in the fourth quarter against their biggest rival. Not only would Wilson need two TDs but also a two-point conversion just to tie... and it happened, with 15 seconds to spare. Then a rare Jan Johnson mistake on Mifflin's overtime PAT allowed the Bulldogs to finish the job. This victory set the tone for the rest of the season and is unquestionably the greatest game of the 2010s. 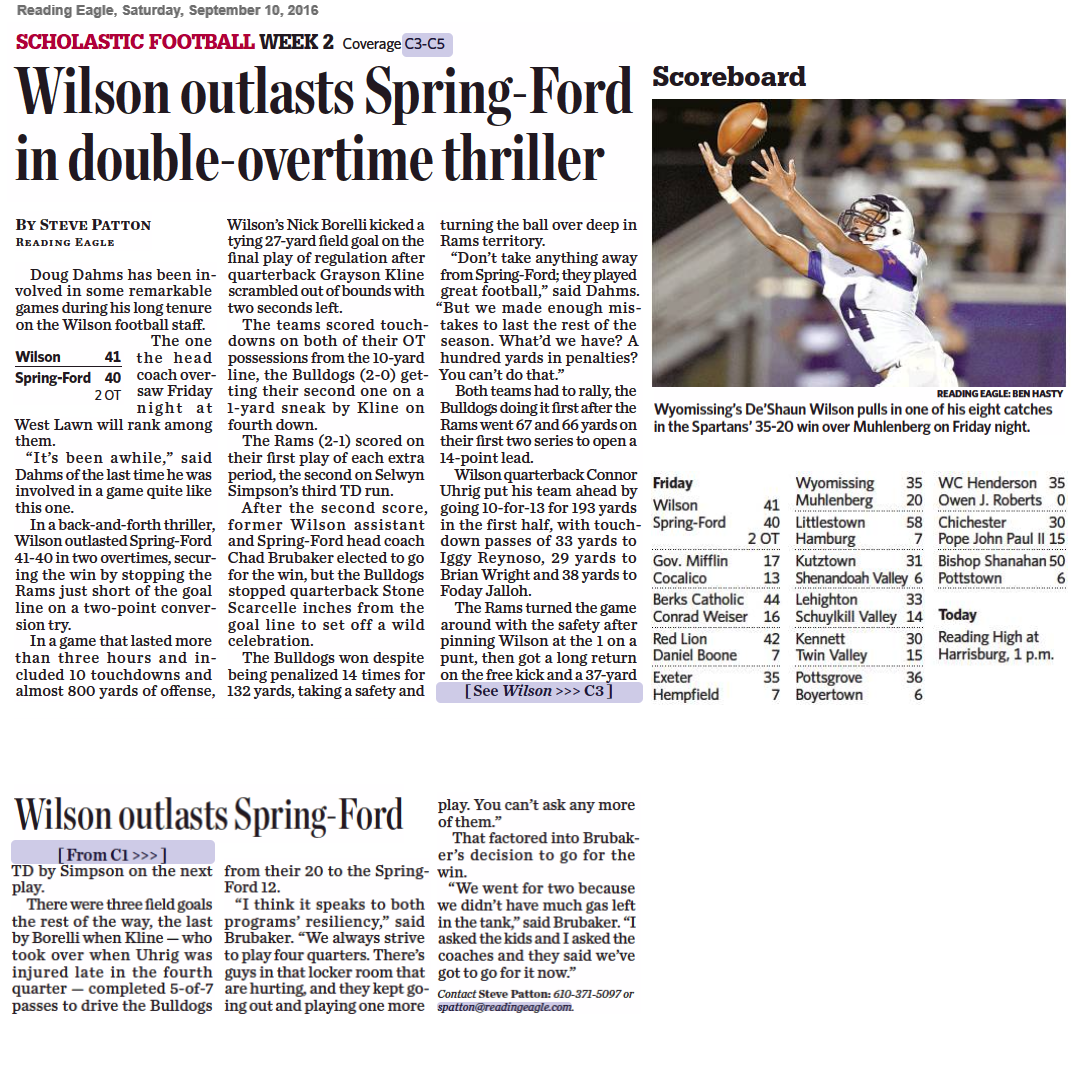 Comments: In many other decades of Wilson Football this would be #1. Perhaps the only reason it isn't is because it didn't happen against Governor Mifflin? That doesn't take away anything from this thriller in 2016. This Bulldogs-Rams match-up had it all: a former Wilson coach on the opposing sideline; back-and-forth scoring (Spring-Ford went up 14-0, Wilson then lead 21-14 before the team's would trade FGs); a back-up QB leading the Bulldogs down the field to tie the game on a FG as the clock expired; not one but two overtime periods; and the game ending on a 2-pt. try that Wilson stops inches short of the goal-line. Anytime a team adopts a "never quit" mentality, great things will happen. And this isn't the last time we will hear from the 2016 team on this list as a direct result of their dedication and resolve. 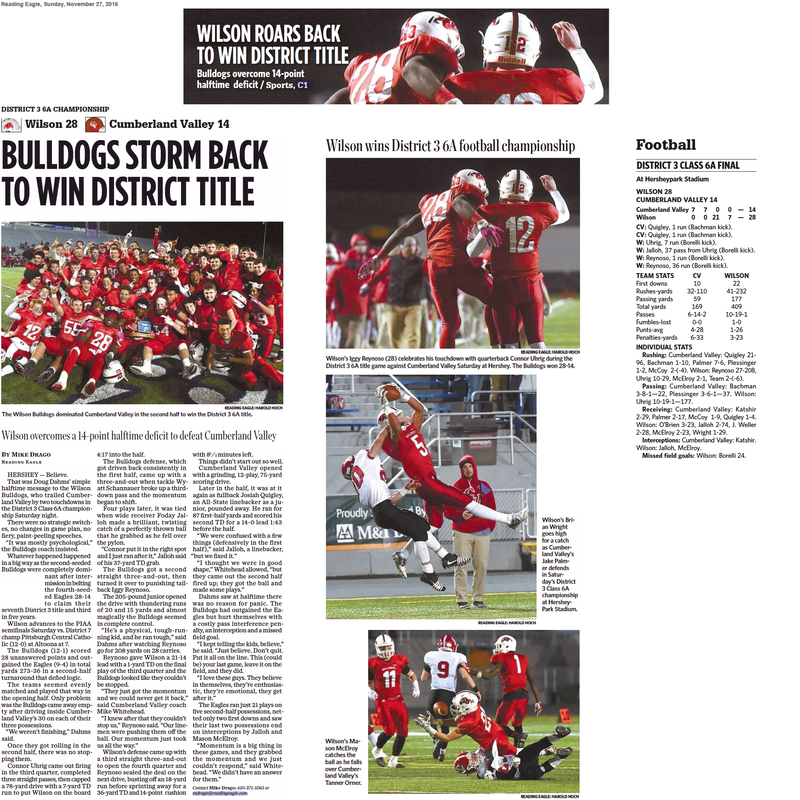 Comments: Like I said for #2, teams that don't quit do miraculous things and the 2016 team demonstrated it multiple times. While this game wasn't as exhilarating as the double-OT goal-line stop for the win against Spring-Ford, overcoming a two-touchdown deficit in the second half against the most decorated 4A/6A team in District history certainly ranks highly. The Eagles controlled the entire first half in the first-ever District 3 6A Championship Game. I remember being met on the field by Justin Raffauf at halftime and he asked me to consider what players and coaches we wanted to interview after Wilson wins. If you know the two of us at all we tend to be pessimistic people but he had all the confidence that the Bulldogs would turn it around... and they did. Wilson looked like a different team over the final 24 minutes, scoring 28 unanswered points en route to the program's 7th and most recent District 3 title.

Comments: The final three seasons of the 2010s didn't exactly go as planned or expected, with the team failing to capture a District championship or an outright LL League title. But the game on Friday, October 11th, 2019, will certainly be remembered for a long time. It was the opening act of the 75th Season Celebration weekend and boy did it deliver. A poor officiating decision on first down lead to senior LB Anthony Koper stopping Warwick RB Colton Miller on back-to-back plays deep in Wilson territory to secure the Bulldogs win - and Doug Dahms' 152nd as Head Coach, surpassing John Gurski and setting a new program record. It was an amazing defensive performance a year after being absolutely gashed by the Warriors in Lititz, when they passed for over 530 yards alone. The 14-7 victory paved the path for Wilson to attain the #1 seed in the District 3 power rankings, much to the chagrin of those in Neffsville.
​
Select photos taken by Joe Mays can be seen in the slideshow below. 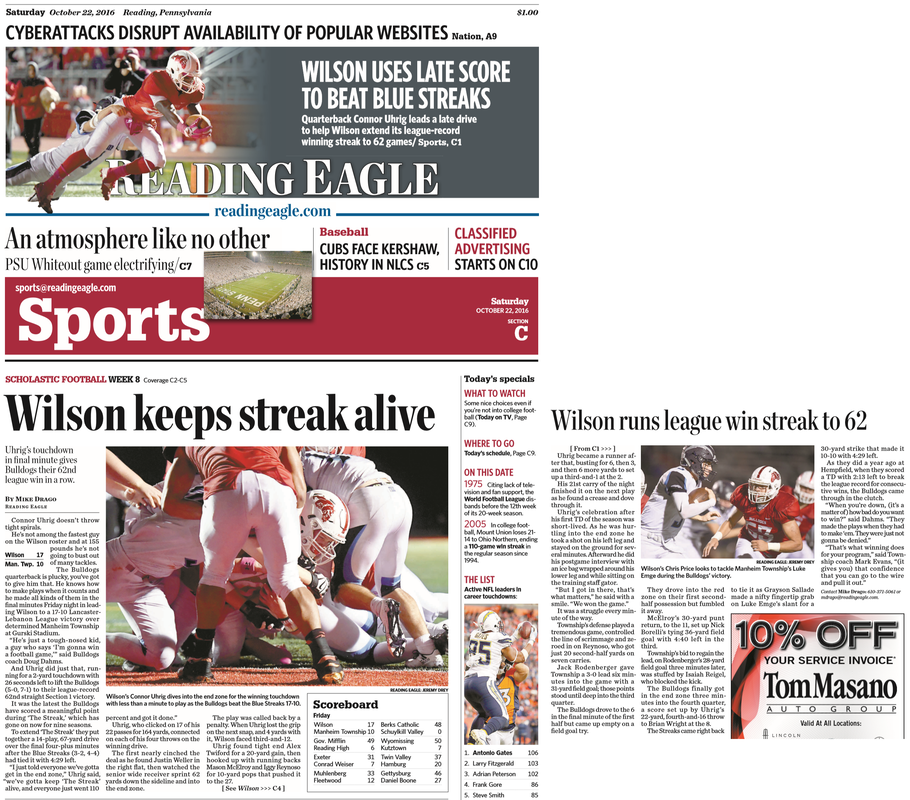 Comments: 2016 coming out of the gate strong, with three games mentioned in the top 5. It was a brilliant season overall and this Week 8 battle was a big part of it. A halftime deficit, late game heroics, and winning streak extenders are memorable and this one fits the bill. On the night where the Wilson Football Tradition Club celebrated the 35th anniversary of the 1981 championship team, Junior QB Connor Uhrig gave up his body to score with 26 seconds remaining in a wet game at Gurski. Uhrig would be sidelined the following two games with a leg injury sustained on the game-winning TD dive. This victory was the Bulldogs' 62nd in a row against Section 1 opponents and would set up the rematch a year later in Neffsville where the Blue Streaks would get their revenge. 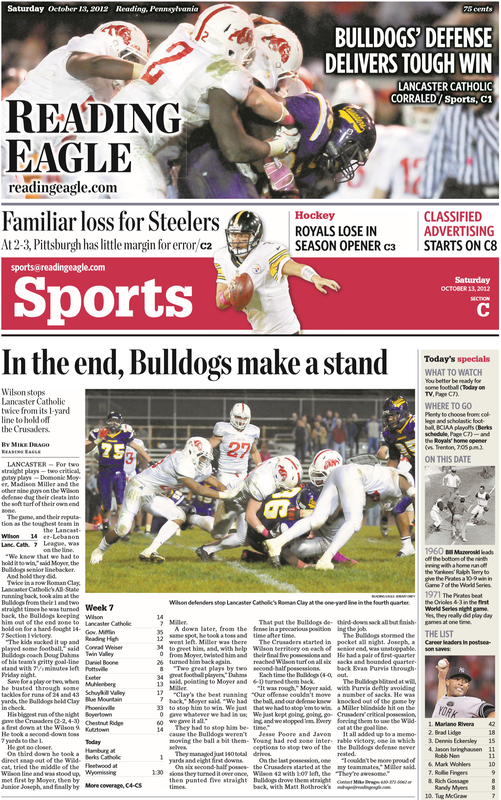 Comments: Before Anthony Koper's heroics against Warwick to close out the decade, there was another two-down stalemate courtesy of an aggressive & ferocious Wilson 'D'. The 2012 defensive eleven allowed the fewest rushing yards and points per game in the 2010s, shutting out five opponents and shutting down rushing attacks. And that wasn't against cupcakes either. Just ask Lancaster Catholic's all-state RB Roman Clay. Denying one of the best RBs in PA a TD to tie the game on back-to-back plays from the 1 yard line was exhilarating. It didn't end the game against the Crusaders like Koper's did vs the Warriors in 2019, but Dominic Moyer & Co. assured the Bulldogs a victory against former Wilson assistant coach Bruce Harbach and Lancaster Catholic midway through the 2012 season. 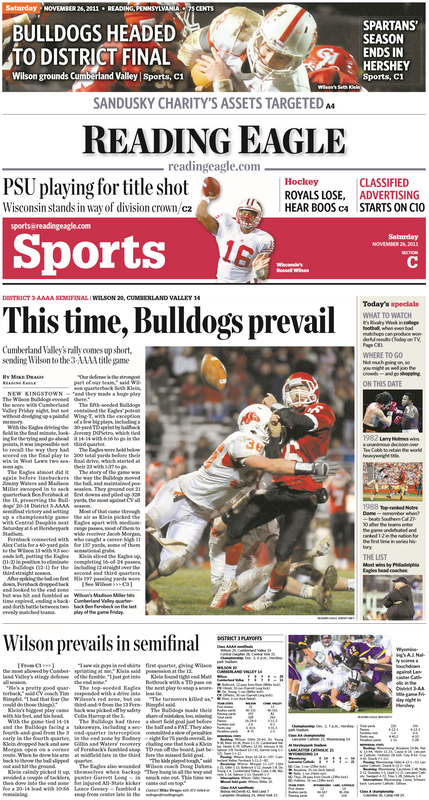 Comments: I missed this game for a wedding... my co-host's wedding. Can you believe that? We missed a great one at Cumberland Valley, too. I remember getting updates from, and passing updates to, the reception D.J. This semifinals victory gave Wilson a slightly shocking berth into the 2011 District Championship game. Sure Wilson had won 12 straight after opening the year with an OT loss at Mifflin, but the Bulldogs were only the 5-seed. They needed to win on the road for a shot at getting to the District title game... and that's what happen. Following an opening round win over Penn Manor, Wilson upset Daniel Boone in Birdsboro to set up this game in Mechanicsburg. I was standing next to the late Barbara Heckman at Justin's wedding reception when the tweet came through that the Wilson defense had held and the Bulldogs won. I've never been embraced so tightly and joyfully by a 77-year old woman than when we were hugging and jumping up and down on 11/25/2011 in Reading's Abe Lincoln Hotel ballroom. The Bulldogs were heading to Hershey!

Photos are unavailable as Joe was in co-host Justin's wedding... can you believe that? Who holds a wedding on a Friday or Saturday during football season? Where's the dedication, Raffauf? 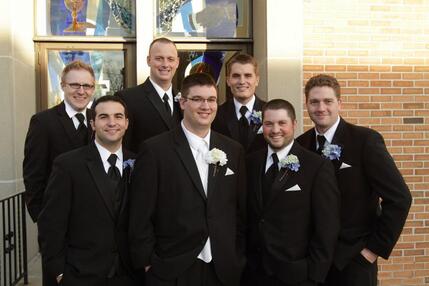 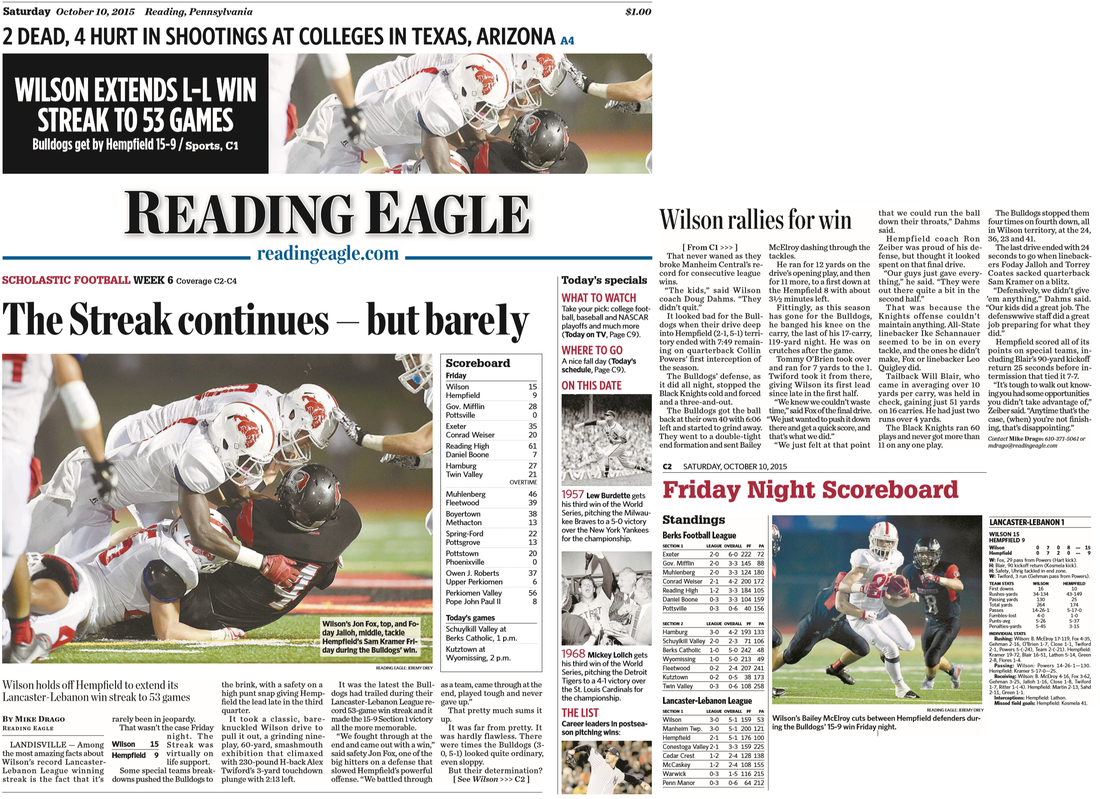 Comments: There were a few close calls during the decade of dominance against Lancaster-Lebanon League Section 1 foes (RIP to that Streak: began w​ith a win on 11/2/2007 and ended with a loss on 10/20/2017). There were close games at McCaskey and vs Penn Manor in 2009; against Manheim Township in 2010; at Lancaster Catholic (see above) and Penn Manor in 2012; ditto for those opponents at Gurski in 2013; or, you know, every time Wilson played at Warwick... at least it felt that way in 2012, 2014, and 2016! The most worrisome already made this list at #5 (vs Manheim Township in 2016) but the next closest call would have taken place about a year earlier in Landsiville. Hempfield was giving the Bulldogs everything they could and after spotting the Black Knights two points on a safety, things didn't look too good for the red and white late in the 3rd quarter. Coincidentally, a victory in this game for Wilson would (and, thankfully, did) set a new L.L. record for consecutive wins vs League opponents at 53, eclipsing Manheim Central's 52. Junior H-back/TE Alex Twiford barreled into the end-zone from the 3 with 2:13 remaining to give Wilson the lead, the exclamation point on a nine-play, 60-yard drive. Foday Jalloh and Torrey Coates secured the victory with a sack of Hempfield's Sam Kramer on their ensuing possession. I remember media member Jeff Reinhart (read his write-up on this streak after the game) tweeting about the possibility of the streak ending, but Wilson pulled a Corso "not-so-fast, my friend" on him and many other doubters that night.

Jollah sacks Kramer on fourth down - WIlson holds and will survive, 15-9. LL record 53 wins in a row. Wow #LLsports #plfootball 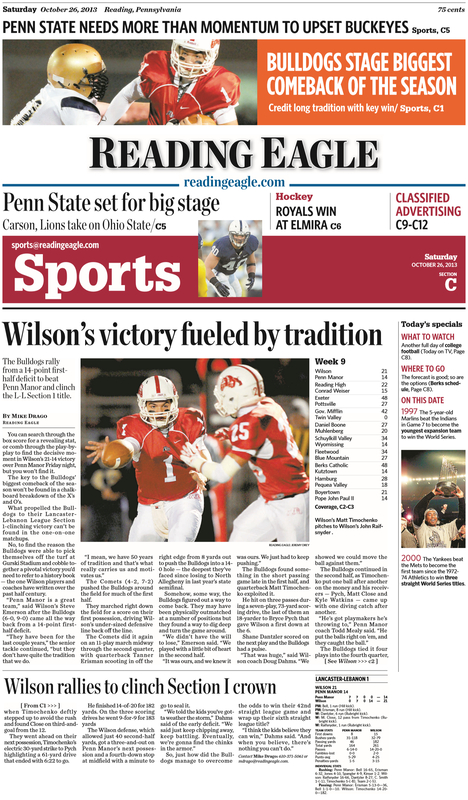 Comments: The 2013 team deserved to be on here, somewhere. And the top 10 games of the decade were all going to be wins, right? So that deflating District semifinal loss to Lower Dauphin (thanks, Joey Julius) can be relived further below, if you're into that sort of thing. The story of the 2013 team is that of an underdog. Every preseason overview mentioned how the Bulldogs returned just 3 starters total and that their League win and title streak was about to end. "Lancaster Catholic and Penn Manor are better!" writers and fans screamed. Maybe they were... on paper, at best. Though they were tough, close games Wilson emerged victorious not only against the Crusaders but also the Comets. On October 25th, 2013, the Bulldogs went into their locker room at Gurski on the wrong side of the 14-7 scoreboard. When the clock read 0:00 at the end of the fourth, Wilson had clinched the Section 1 title - their 6th straight. The 2013 team was young, undersized, and not very flashy. But they believed in themselves and their teammates to execute a perfect regular season. And their story was one of the best we saw play out during the last 10 years. 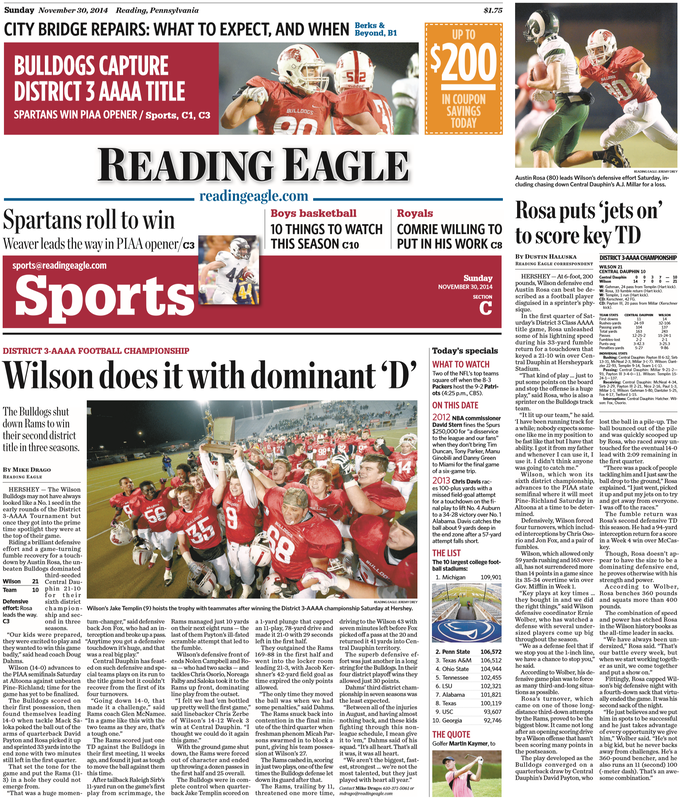 Comments: The 2014 team opened this list. They'll end it, too; bookends from that magical season, from win 1 to win 14. Despite rolling into Hersheypark Stadium with a pristine 13-0 record, seventh-straight undefeated run through LL Section 1, and a previous victory over the Championship Game opponent (Central Dauphin) earlier in the season, the Bulldogs were doubted. Again. But as they had done so often the last 15 months, the Wilson players rallied and never gave up. This time though they wouldn't need a comeback to earn respect - or the Title. As so often was the case on this list, it was a stellar defensive effort - with some opportune offensive plays - that catapulted Wilson to the 2014 District Championship victory, 21-10, over the Rams. The program's sixth D3 Title (and last in 4A) had an exciting beginning: a Jake Templin to Jake Gehman TD pass to put Wilson up 7-0, followed on the next series by Austin Rosa's fumble scoop & score to make it 14-0. And that was more than enough for these Bulldogs to succeed. 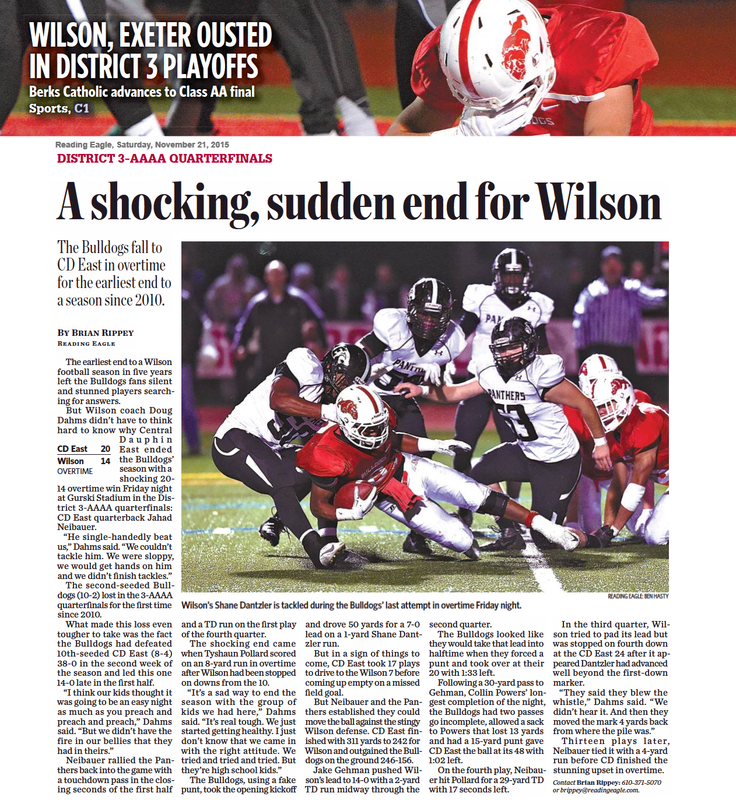 Wilson Season Ends Against Harrisburg on Untimed Down Near Endzone 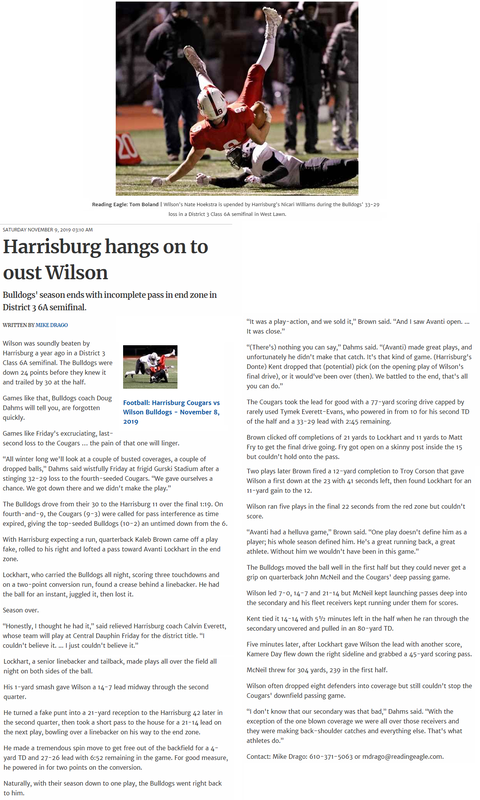 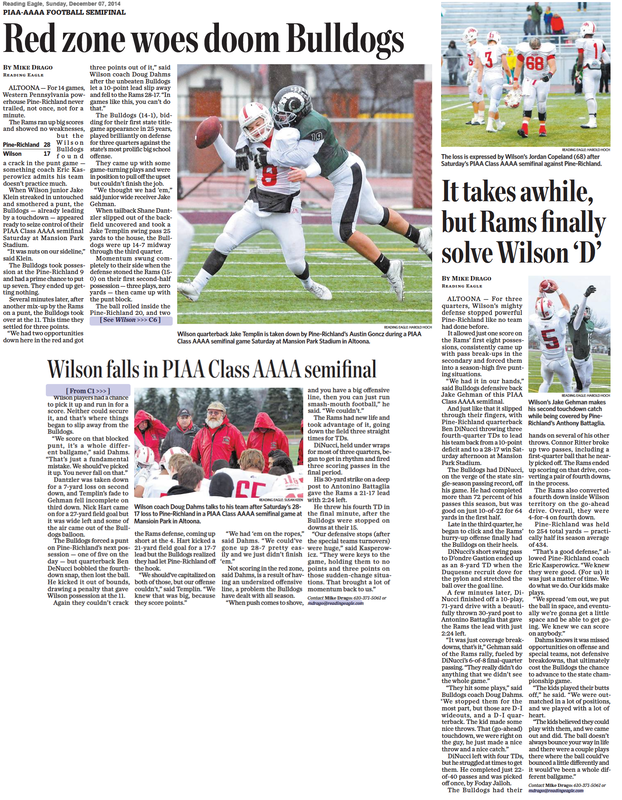 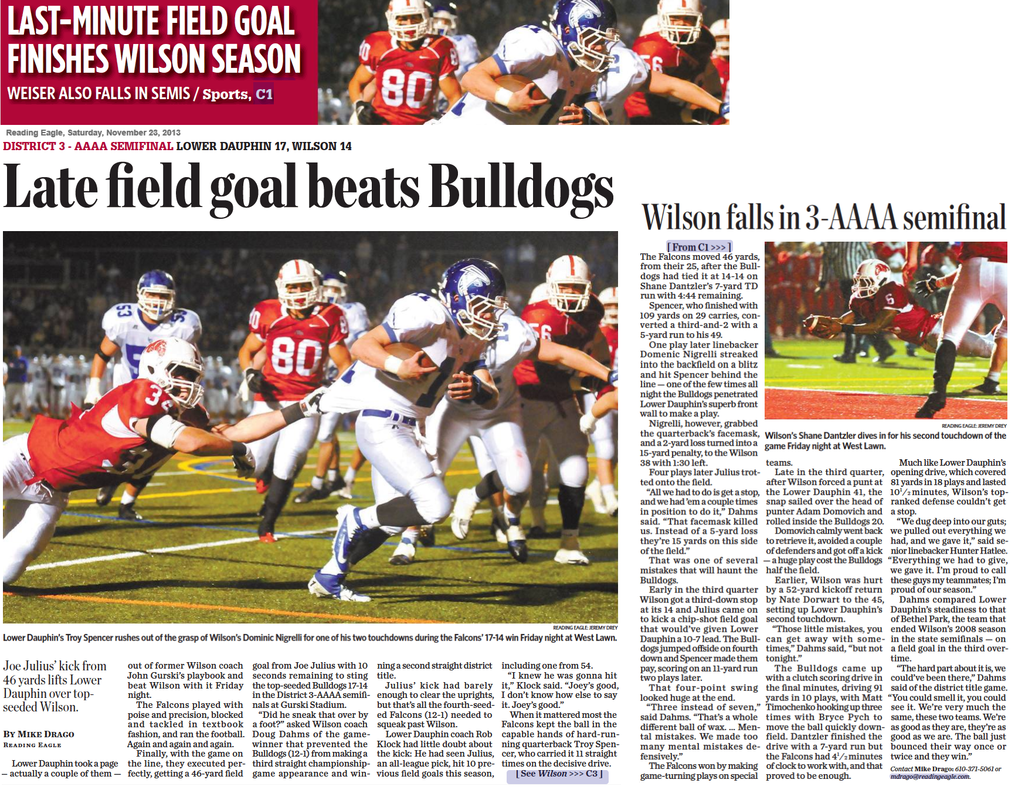 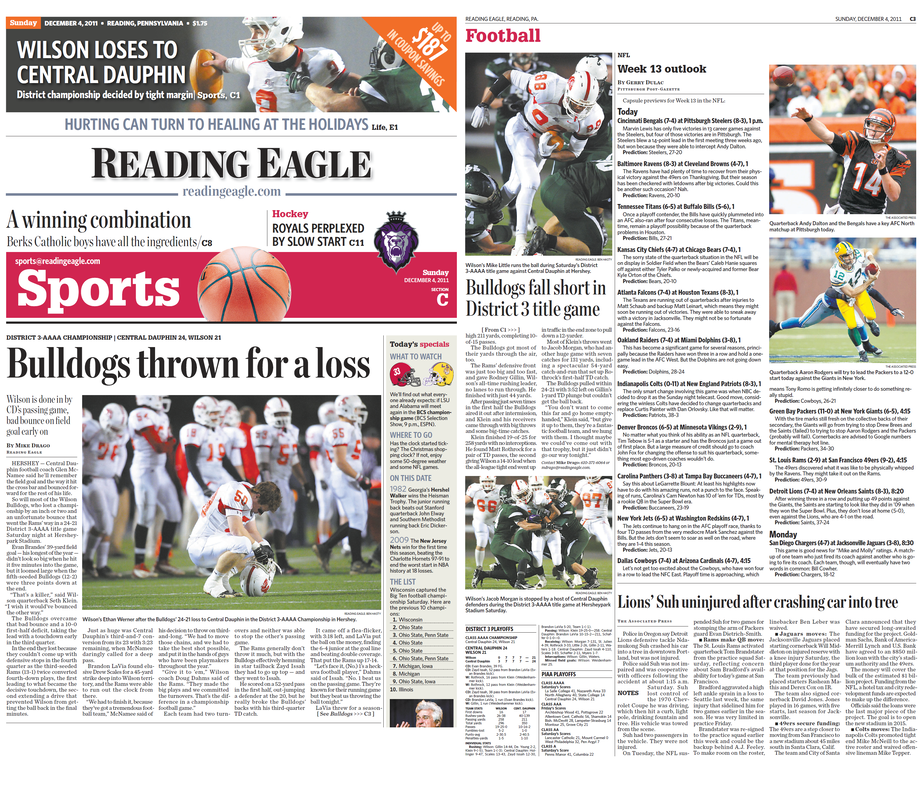